The Non-lucrative Visa in Spain is for people who wish to establish their residence in Spain, and have sufficient means of subsistence to live in Spain, without the need to perform any commercial activity.

Spain is a country that stands out for its quality of life for expats, holding an outstanding position in global rankings, especially concerning customs and family life. Obtaining Spanish residency will bring a range of benefits, including free access to 26 European countries in the Schengen area.

Who should be think on applying for the non-lucrative visa?

This non-lucrative visa is specially suitable for:

Which are the main benefits of the Visa?

This Visa has a series of benefits that make it very attractive for people who want to reside in Spain and are able to meet the requirements that are demanded. Some of the most important are the following:

The non-lucrative residence visa application must be submitted at the Spanish Consulate of the applicant’s home country.

For each additional family member, 100% of the IPREM is required, which in 2021 amounts to €564.90 per month or its equivalent in the foreign currency.

*The multiplier for the public income index (IPREM) is a reference index used in Spain for the allocation and granting of economic aids, subsidies, allowances or the unemployment benefit among others, based on income. This index was introduced on 1 July 2004 to replace the minimum interprofessional salary (SMI), which allowed a more important growth of the SMI to not affect the entire system of economic aids and subsidies. The IPREM is updated at the beginning of every year in the Budget Law of Spain.

What is the deadline to submit the non-lucrative residence visa?

The deadline for processing the application is three months. If the visa is granted, the applicant must enter Spain within the validity period of the visa (maximum 3 months). Within one month of entering Spain, the foreign national must register and personally apply for the residence card.

With regard to the taxes derived from the non-lucrative residence, it should be noted that in order to be eligible for renewal, it is compulsory to spend a minimum of 183 days in Spain, which implies becoming a tax resident.

This means that they will be accountable to the Spanish tax authorities for the revenues they have earned worldwide. However, this does not mean that you have to pay twice for the same income, in Spain and in the country where it was generated, as there are double taxation agreements for them.

The other two cases in which tax will be payable in Spain are on profits made on investments or on those associated with the sale and purchase of property. 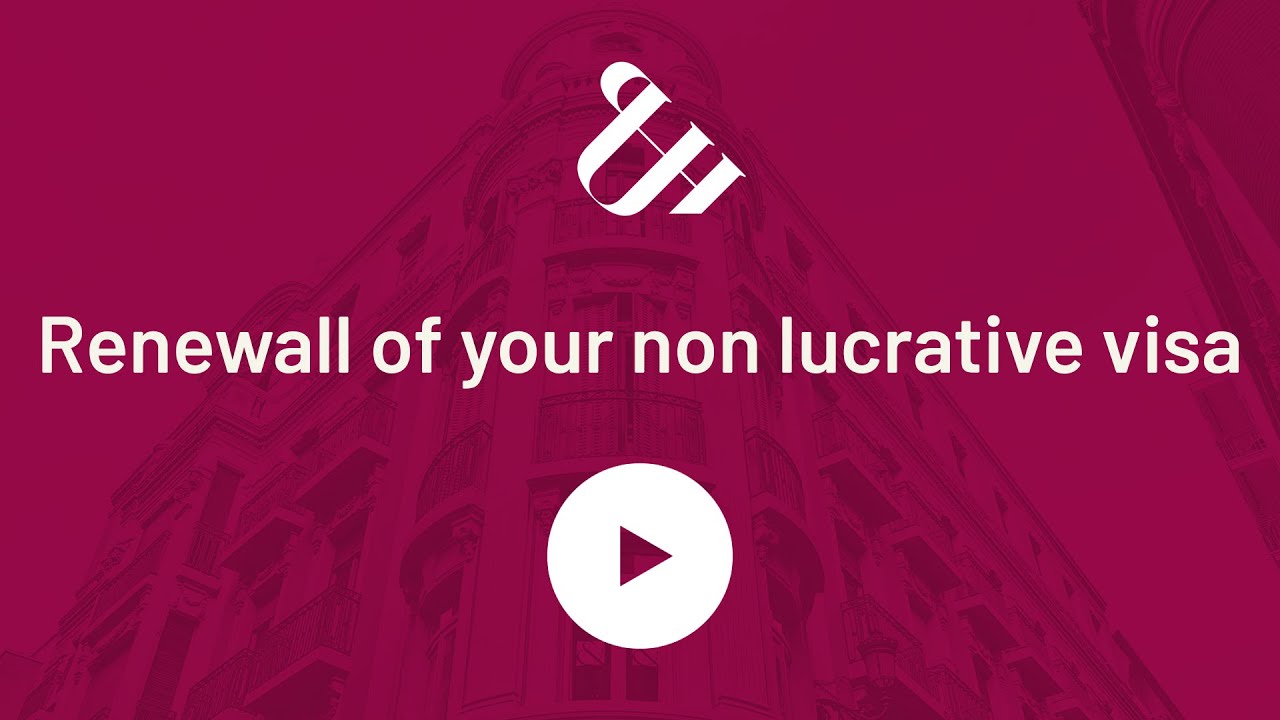 Renewall of your non lucrative visa

What to do if your visa application has been rejected

What is a non-lucrative visa?

It is a permit that allows you to reside in Spain and travel throughout the Schengen area. Its main characteristic compared to others is that you do not need to have any remunerated activity.

How long does non-lucrative visa last?

Obtaining this permit allows us a period of residence in Spain of 1 year. After this time the visa can be renewed two years for a total of two times. Once this time has elapsed, it is possible to apply for permanent residency.

What do I have to do to have my permit renewed?

This card must be renewed after one year in the country, and the renewal permit obtained is valid for a period of two years.

You must submit the renewal application between 60 days before and 90 days after the expiry date of the visa.

The requirements are practically the same as those initially requested. However, there are some changes that should be taken into account, such as, for example, that in terms of economic solvency the figure is multiplied by two, which is logical if we think that the renewal is for two years.

What should I do in case my non-lucrative visa is denied?

The reasons why an application may be rejected are varied. Before taking any action, we always recommend that you make sure that you have the most up-to-date information and review official sources of information such as this one or this one.

In case you do not get an affirmative response to your application, our advice is to consult a lawyer specialised in immigration law to resolve the obstacles that have prevented you from obtaining a visa.

Am I allowed to get a non-lucrative visa if I have been living before in Spain with a student visa?

No, it is not allowed to obtain a non-lucrative visa if you have been living in the country on a student visa before. For this, you need to return to your home country and start the visa application process.

Can I apply for a work permit after a period of time?

Yes, it can be done. After the first year you can apply for a change from a non-lucrative visa to another residence permit that allows you to work. This requires a pre-employment contract that proves the viability of granting the work permit.

For how long do I have to live in Spain if I get the Visa?

You have to live in the country for 183 days a year. The main implication of this measure is that you are obliged to declare taxes to the Spanish state.

Of all the options offered by Spanish immigration legislation that do not require long periods of residence or having to account to the tax authorities, we recommend the Golden Visa, also known as residency by investment.

© 2022 PELLICER HEREDIA – Alicante Lawyers
We use our own and third-party cookies for analytical purposes and to show you personalized advertising based on a profile prepared from your browsing habits (for example, pages visited). Click here for more information. You can accept all cookies by pressing the "Accept" button or configure or reject their use by clicking "change settings".
Accept cookies
Cookies Settings
Cookie Box Settings
Cookie Box Settings
Privacy settings
Decide which cookies you want to allow.You can change these settings at any time. However, this can result in some functions no longer being available. For information on deleting the cookies, please consult your browser’s help function.Learn more about the cookies we use.
With the slider, you can enable or disable different types of cookies: